Summertime means an abundance of fruits and vegetables, and while we gorge ourselves on the freshness as long as possible, we’ve always searched for ways to prolong that goodness as much as possible.  Hundreds of years ago in the Middle East, people developed jams, jellies and preserves to do just that.  (There are lots of names for preserved fruit creations from cultures around the world.  See the Wikipedia page below for good definitions of each.)  It is thought that Crusaders developed a fondness for them during the Crusades and brought them back to Europe where they quickly spread.  (Pun intended!)

When I grew up, I spent many afternoons accompanying my mother to various fields to pick fresh vegetables.  We not only went to fields, but we crisscrossed dirt roads looking for wild blackberries and plums that grew alongside them.  That meant being careful and always on the lookout for thorns, poison ivy, and snakes.  Fortunately, pick-your-own farms are now everywhere, with thornless bushes and nice neat rows.

My wife and I have continued that tradition, making jams, jellies, preserves, pickles, and relishes to enjoy, share and sell at local farmers markets.  When we recently visited my wife’s parents, my mother-in-law asked that we demonstrate canning with her, because it’s something she had never done, so we packed up our supplies and some freshly picked blackberries and headed down.

Canning is really easy.  There are many books and websites with step by step directions. We chose a simple blackberry jam recipe with three ingredients:  berries, sugar, pectin. 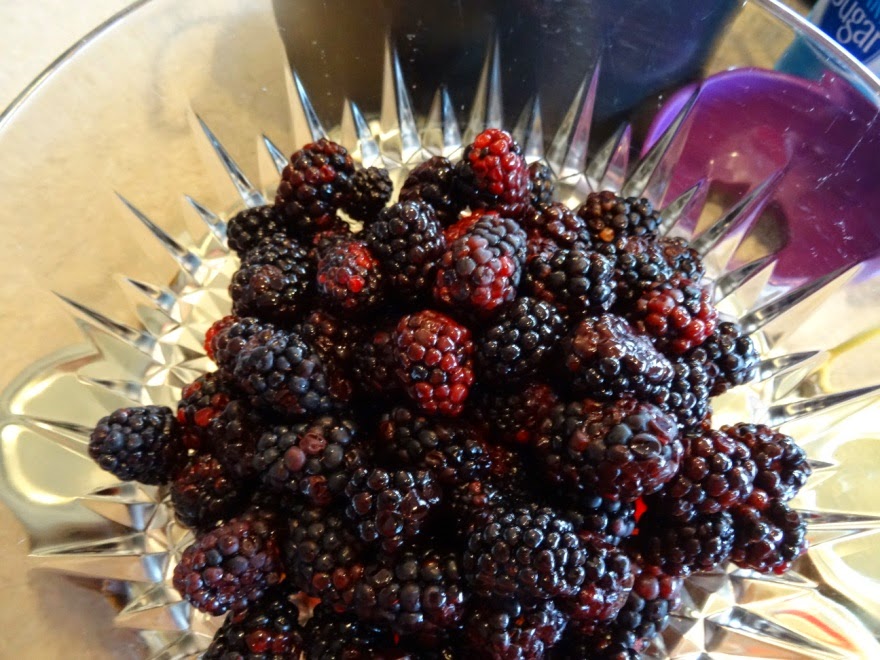 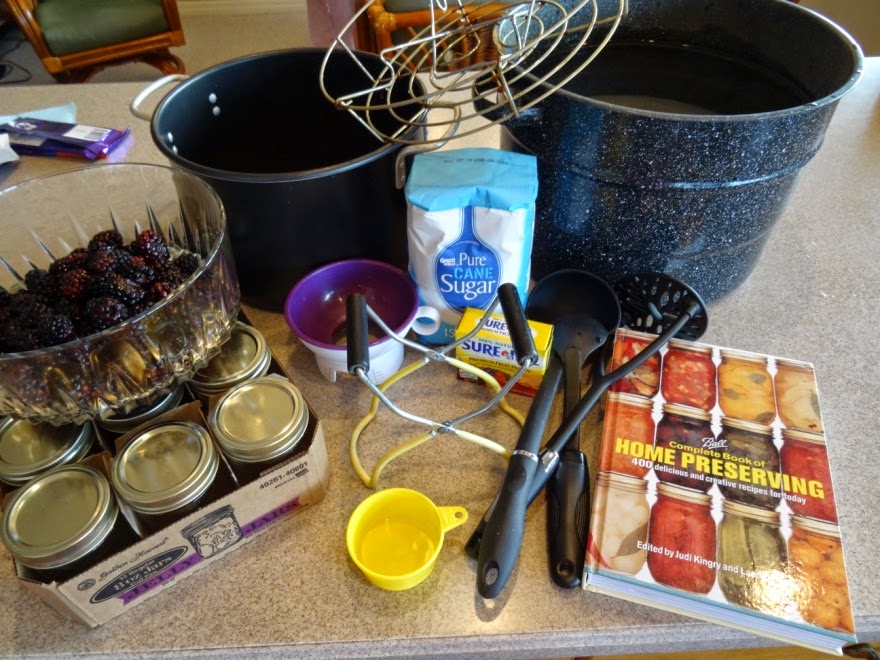 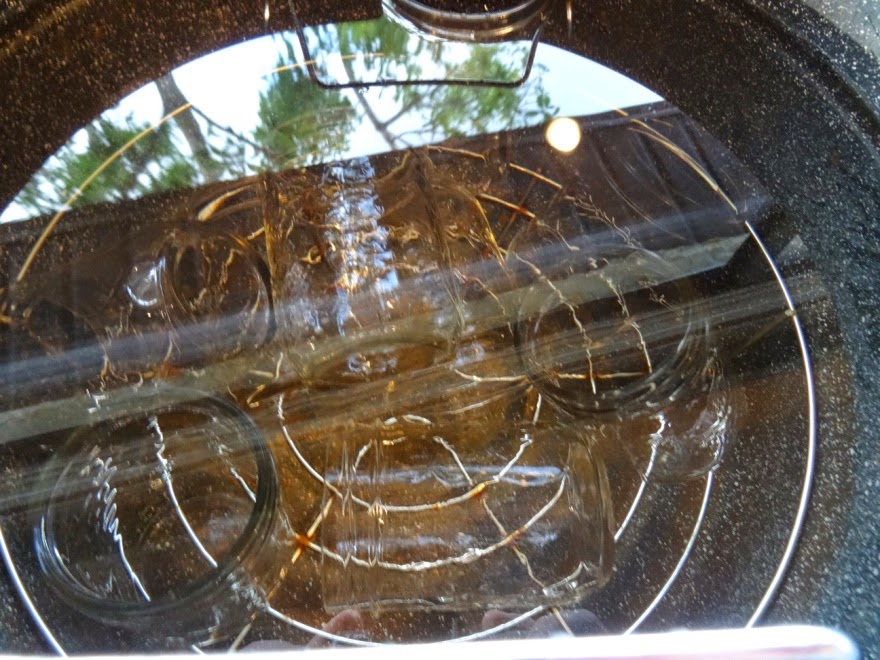 Meanwhile, the jars have to be sterilized.  Put the jars in the rack in the canner and bring it to a boil.  It’ll take a while because of the volume.  Once boiling, let jars boil for 10-15 minutes, then remove.  Leave canner boiling. 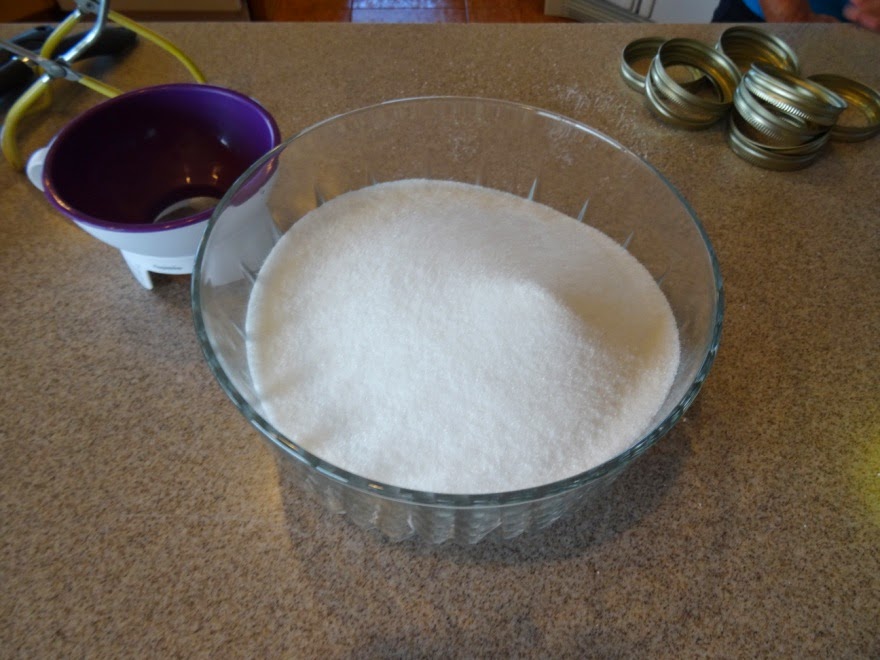 For this recipe, I’m using 6 cups of sugar.  The lids (but not the rings) also need to be sterilized. You can put them in a small pot of boiling water for a few minutes or pour boiling water over them in a bowl.

Now mix the blackberries and pectin together and bring to a boil for a couple of minutes.  Add the sugar and bring it back to a rolling boil that can’t be stirred down.  Then remove from heat. 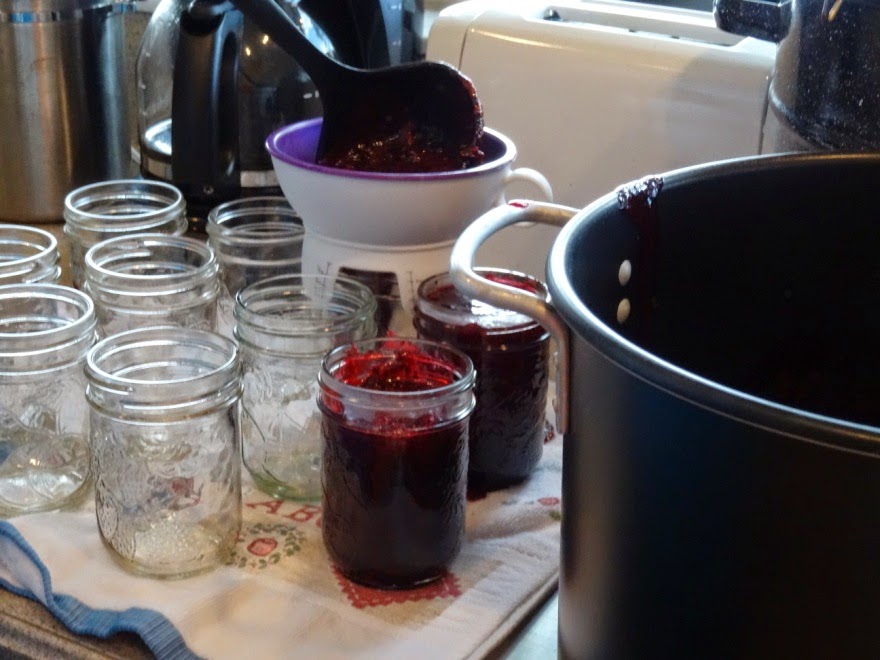 Ladle jam into jars, making sure to leave headroom, and then use a damp paper towel to wipe the tops clean and put on the lids. 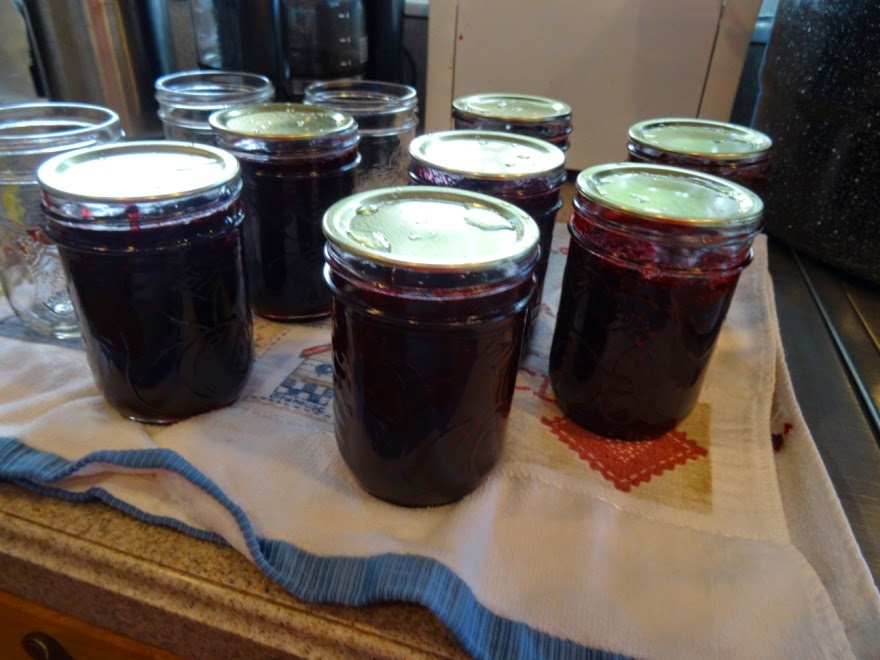 Then, the jars have to be processed. Put the rings and twist till you meet resistance.  Using the jar tongs, arrange the jars around the ring and submerge.  Cover the canner and boil for 10-15 minutes. 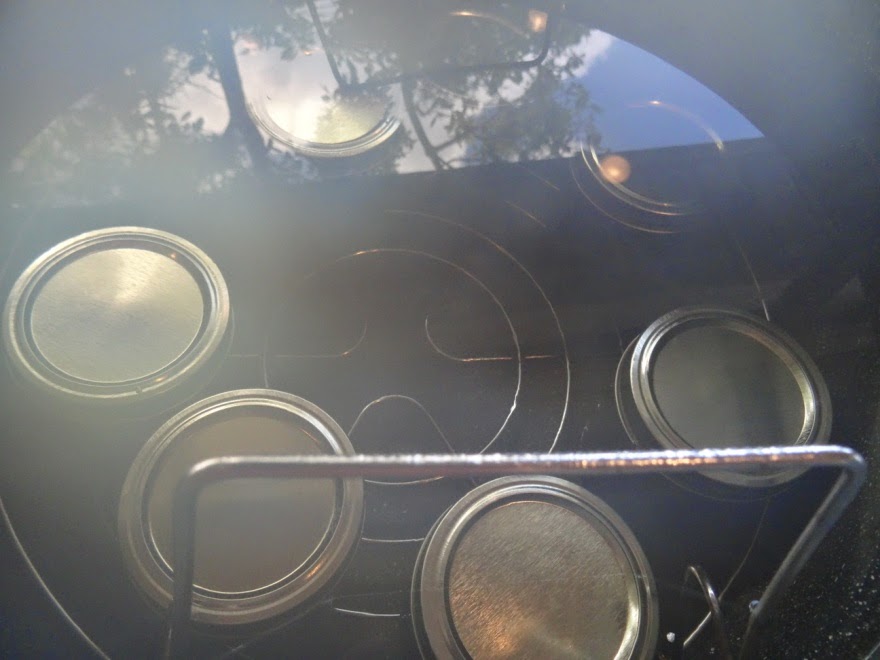 And you’re done.  Bake some biscuits and enjoy! 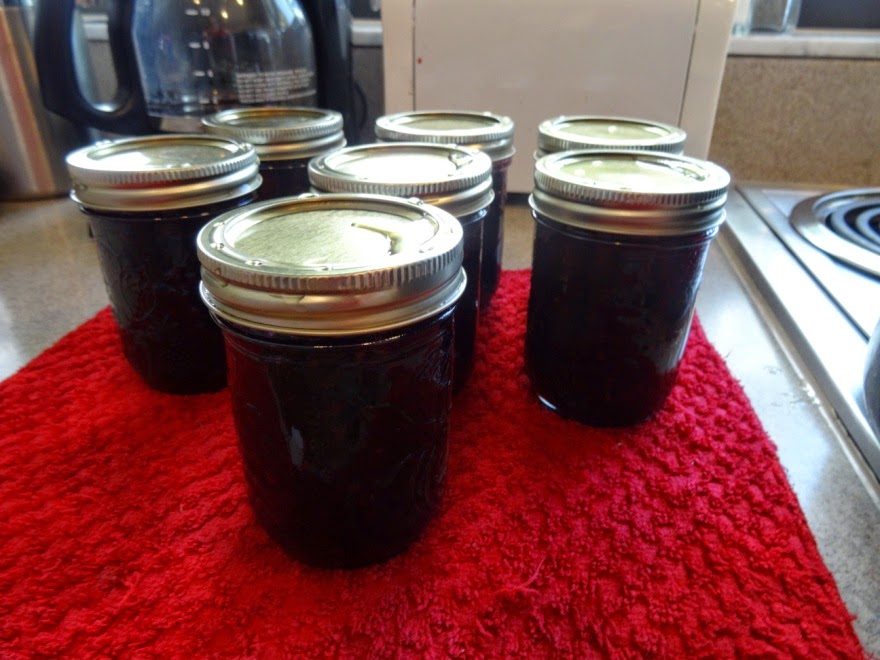 
As vegetables from summer gardens and farmers’ markets come into season, many home cooks find themselves deluged and search for ways to preserve the flavor of summer.  Relishes are an excellent way to do just that.  Relishes are chopped and pickled vegetables or fruits used as condiments, used on sandwiches, meats, vegetables – nearly everything.  They are thought to have been invented in India centuries ago, but they have spread to practically every culture in the world.  Wikipedia’s page on relish lists dozens of international varieties.  (Relish. (2014, May 28). In Wikipedia, The Free Encyclopedia. Retrieved 13:50, June 29, 2014, from http://en.wikipedia.org/w/index.php?title=Relish&oldid=610468949)
My wife and I made few varieties last week which we will have on hand to enjoy for months to come:  Chow Chow (a long-time southern favorite), Piccalilli, Zesty Zucchini Relish, Golden Relish, Cucumber Relish, and Achar (South Asian/Indian pickles).  Relishes are quite simple; all you need are vegetables or fruit, vinegar, and a few spices.  The fun is that you don’t have to stick to a particular recipe when it comes to vegetables; use what you have lots of on hand.


First, the vegetables.  The hardest part is all the chopping.

Second, some recipes require you to salt the vegetables and set in a cool place overnight.  Then, you rinse and drain and begin cooking. 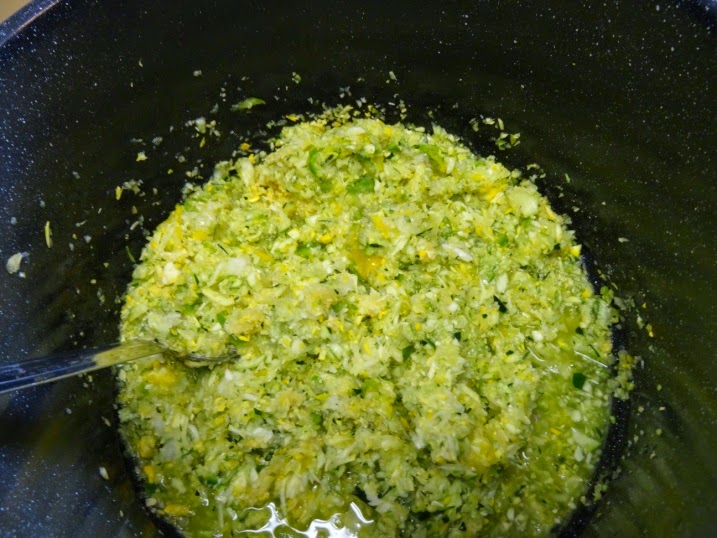 After rinsing and draining, you cook the vegetables with the vinegar and spices for a few minutes, and then you’re ready to put it in jars. 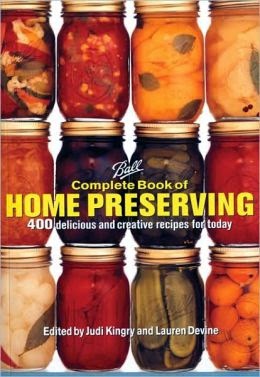 Posted by Histocrats at 3:00 PM No comments:

Hunting for History: Exploring the Food of a Modern Land 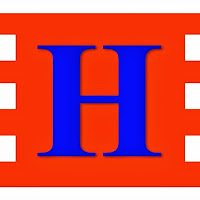 My wife and I decided to undertake a foodie quest this summer. We would have lunch at a different restaurant that we’d never eaten at before. We would seek out restaurants that either represented different ethnic cuisines or restaurants of historical or culinary distinction that we had read or heard about in the metro Atlanta area. Together we would sample the food of the modern South.

We started out kind of accidentally. On Saturday, we were in North Georgia and decided to eat late lunch in Gainesville. We stumbled on Supermercado & Restaurante Carrillo El Guero (730 Pearl Nix Parkway). Of course, Mexican food isn’t exactly new to us; it’s one of our favorites, but this place was different. This place was a large Mexican supermarket with a small restaurant attached, obviously catering to the large Mexican population in the area. This place offered authentic Mexican food, not the Americanized or Tex-Mex version. Tacos and soups are the main focus of the menu, and they feature ingredients that Americans may not necessarily consider on Taco Night, but which are extremely popular in Mexico: spicy pork (al pastor), beef tongue (lengua), beef tripe (stomach), beef cheek, beef brain, chorizo (spicy sausage), and goat.

As soon as we were seated, we served chips and a delicious salsa, along with a ceviche – a dish made by during raw fish in lime juice with peppers and onions. We ordered pork, tongue, and chorizo tacos, and a shrimp cocktail. The tacos arrived in authentic Mexican style, just meat on small homemade masa corn meal tortillas, without the usual American condiments. They were delicious. We were more than filled, and the bill for the two of us was under $16. It was a great lunch!

On Monday, we decided to go for Korean BBQ and went to Buford Highway in Atlanta. If anyone doubts Atlanta’s position as an international city, he or she only needs to go to the Chamblee/Doraville area to find stores and restaurants catering to just about every ethnicity possible. Unlike larger cities with specific areas like Chinatown, Little Italy, or Little Havana, the Buford Highway area is a jumble. You might see Cuban, Korean, Vietnamese, Peruvian, Mexican, Persian, Indian, and Malaysian businesses in the same shopping center. Koreans have become a large minority in metro Atlanta, and many businesses have only Korean lettering.

We settled on the So Kong Dong Tofu House, located between the Hyundai Barber Shop and a Ping Pong Hall (5280 Buford Hwy). So Kong Dong is named after a neighborhood in Seoul. It’s all about choice at So Kong. You can choose any combination of tofu soup, Korean BBQ, or savory pancakes made with leeks or scallions, for example. With your order, you get a selection of side dishes collectively called banchan, mainly noodles, pickled vegetables, and kimchi, but also including fried fish. We ordered mushroom tofu soup, seafood tofu soup, and BBQ beef. Another great meal, but a little more expensive, about $15 each.

Our quest was a great success. Not only did we discover great new foods and restaurants, but we really experienced Atlanta in a new light, as a truly international city.
Posted by Histocrats at 3:00 PM No comments: