Here are some more documentaries currently available on Netflix. 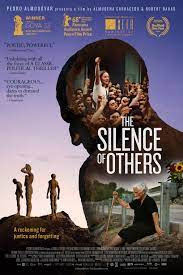 The Silence of Others is about the ongoing push for justice for those who imprisoned, tortured, and murdered opponents of the fascist Francisco Franco, the dictator of Spain from 1939 to 1975. In 1977, the Spanish legislature passed a law that granted amnesty to anyone for any crimes committed on behalf of Franco and his government. The purpose, according to supporters, was to forget the past terrors - which continued throughout the entirety of Franco's rule - and move on. The effect has been that people who were tortured, imprisoned, and killed have gotten no closure or justice.  One of the major subjects of this documentary was a man who took part in anti-Franco demonstrations as a student. He was arrested and tortured by "Billy the Kid," one of the most notorious fascist interrogators. Today, they live a few blocks from each other on a street named in honor of one of the most brutal fascist generals. A couple of elderly women featured in the documentary have spent their lives trying to recover the remains of their executed parents for proper burials. Instead of forgetting and moving on, the crimes of the regime continue to divide Spaniards. The focus of the documentary is the effort to seek justice through a doctrine called "universal jurisdiction," a new concept to me. The Spanish victims group, blocked from using the courts of Spain, has turned to a judge in Argentina to collect evidence. The idea of universal jurisdiction is that in cases of war crimes and crimes against humanity, charges can be brought by any jurisdiction. This idea comes from the Nuremberg and Tokyo trials following WWII and has been applied in more recent cases like that against Chilean dictator Pinochet and various other war criminals. It really is a moving an enlightening documentary. 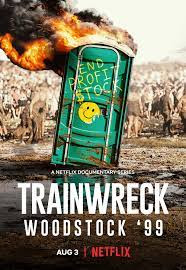 Back to music with Trainwreck: Woodstock '99. Full disclosure: I was not a fan of 90s music. I am hopelessly stuck in the 1980s, and I dislike almost all "Hit" music since the 90s, so the 30th anniversary of the original Woodstock concert did not register on my radar when it happened. I knew almost nothing about the huge fiasco that it was. The promoters, staff, and even a few of the musicians acted out of total stupidity, incompetence, and possibly criminal negligence. the hundreds of thousands of clueless and horribly behaved people who attended were lucky to leave with their lives. (Actually, three people did die sadly, of heat exhaustion, heart attack, and being hit by a car.) There was a lack of water, a lack of adequate security, extreme heat, and arson, not to mention reports of rape. Yet, the promoters intentionally covered up and evaded questions about any negatives, even as the venue (Poor decision #1) burned. 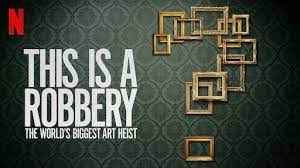 Back to 1990, and This Is A Robbery: The World's Biggest Art Heist . In the early morning hours of March 18, 1990, two men dressed as Boston policemen walked into the Isabella Stewart Gardner Art Museum in Boston, a quirky little private museum in the mansion of the quirky little Boston socialite Isabella Stewart Gardner. Thirteen works of art, with a value today estimated at between $250 and 500 million dollars, were stolen, seemingly singled out specifically since the robbers had over 80 minutes to "shop" for the articular works they took. The works have not been recovered, and no arrests have been made, 32 years later. The documentary series goes through all the theories and suspects, leading one to drawing conclusions. Unfortunately, it still looks like neither recovery nor prosecution will ever be possible. However, the documentary was extremely interesting as experts explained the world of art thieves and heists. 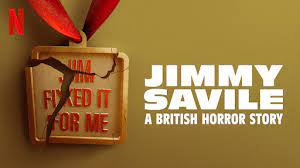 So who the heck is Jimmy Savile? I'd predict well over 90% of Americans were like me and had never heard of Jimmy Savile, who was treated as a British national treasure for well over 50 years. Maybe imagine Walter Cronkite, Dolly Parton, and Betty White, and Mr. Rogers level fame and love combined. He was a radio dj, tv presenter, and eccentric who was knighted for the many, many works he did for charity and philanthropy. He died in 2011 at age 84, and the entire UK mourned. Then, the next year, people started coming forward to accuse him of pedophilia. As it turns out, there were occasional accusations throughout his life, but these accusations were swept under the rug, and accusers were discredited. Since 2011, however, hundreds of charges have been investigated. This short documentary series examines the whole shocking episode.
Finally, there's Final Account. As the WWII generation leaves us, this is an important documentary to watch. Released in 2020, it consists of interviews with Germans who lived in Nazi Germany. They were Hitler Youth Members, Brownshirts, SS soldiers, concentration camp guards, civilian workers in concentration camps, and citizens living near camps. They tell their story, and Germany's story during the Nazi years. When I visited Munich several years ago, I loved sitting in an outdoor cafe in the afternoon with an iced coffee or something, and I found myself watching older German me as they walked be and asking myself "What were you doing in the 1940s? Did you know about what went on at Dachau, about twenty or thirty minutes away?" Many of the subjects interviewed denied knowing what was going on. Some admitted that they had witnessed some of it. One SS and flat out denied that the Holocaust happened. Other SS men swore that the SS wasn't involved. A bookkeeper at a concentration camp said "but as I was a bookkeeper, I had nothing to do with it." Another SS man said he fully supports Hitler and all of his goals today. It was really disturbing, but a compelling watch.

Posted by Histocrats at 3:30 AM No comments: